A downloadable game for Windows

Project S.H.M.O.O.P is a horizontal shoot-em-up (shmup) that hearkens back to shmups of the 90's. It features 5 levels, 14 bosses, 2 playable ships, and 0 original assets.

The game has been in development since Thanksgiving of 2015.Plans to develop the game as a standalone title for sale with a team fell though, but I carried on with the project out of love for the genre. I have no intentions of selling this game, I just want others to have fun.

This game is provided free of charge and is for entertainment purposes only, Please don't give me money for this, it'd probably result in legal trouble with somebody. All audio and visual assets belong to there original owners and creators

Well it look a lot like thunderforce 4 on genesis.

Fun game so far, haven't got very far though but that is because I'm stubborn to put it on an easier difficulty.
Caranda Mountain

mid-Boss 1
My only complaint is that his giant ball of death is incredibly fast for how big it is. It's easier after the first time you see it but the first time it's insta kill imo.
Maybe when he switches to the phase, before firing the first one he does a slightly longer charge animation.

The rest of the stage is fine, I do think power ups are too sparse.

Before the second(?) midboss there is a laser grid section where you gotta wait for the lightning to go away. The last grid is really unfair, the 3 times I've reached it I got hit by it. I also don't think their bullets should go through walls, that is unfair.

Mid Boss 2(?) - The eye fucker
This guy is the reason I took a break for now. He is just brutal.

The only real attack I have a huge issue is when he throws the giant lightning rods at you, Most of them are practically impossible or sometimes literally impossible to dodge.

Even when there a tiny gap if you're really good and can squeeze under. You cannot do that AND dodge him striking lightning at you.

Also not really unfair but I do wish the lightning strike hit the wall.

BUG: If you beat the eye boss and die at the same time. The music after the boss will overlap with the main menu music.

I also think the homing attack is criminally weak. It is really bad at tracking enemies and will follow a single enemy even if they go behind you. If the enemy is remotely fast, you will never kill it. Which is terrible since 95% of enemies are remotely fast. I will kill like 3 enemies per screen.

Not much of a writer but have to say loved where you are going with this game liked almost all aspect.

I'm a huge fan of shmups and thank you for bringing another one into the world. So I'll just rattle off a couple things I noticed, and take the placeholder assets for what they were.

+Really like the speed-change ability, helps to adapt to both more precision projectile avoidance and quickly getting out of harm's way for huge boss attacks.
+Music and sound effects are solid. I don't know if those were ripped from anywhere, but hey they work.
+Weapon upgrades work like a dream, shootan is just sweet in general.
-Hitting the big cube enemy with the Homing weapon didn't give any indication of collision unlike the default blast.
-Fisting boss looks a little jank when he swaps immediately to the open mouth sprite without any indication of charging the laser.
-I think the mountain backdrop could use some animated elements like low opacity clouds or something that continue moving when the screen locks for a boss battle; just to keep the whole thing from feeling so static.
-If you Game Over right before the "Warning" text, it still plays so that both the warning and the game over text overlap each other.

Overall, keep up the good work. 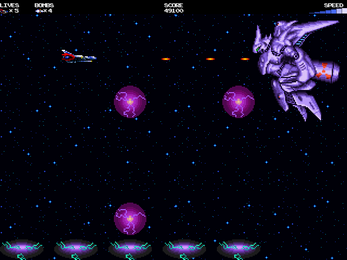 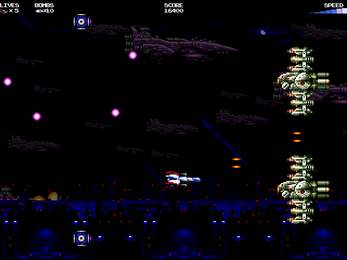 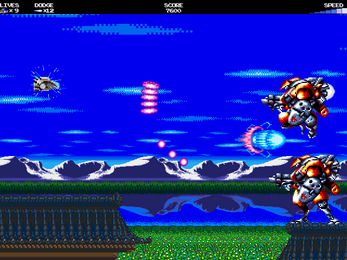 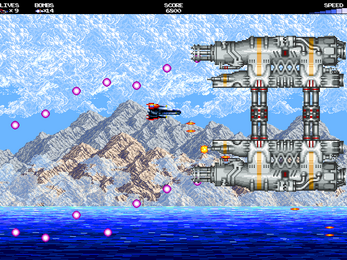